Most of the buildings in which we live are thermally inefficient. Much of the energy we use to heat them escapes, providing little benefit, and costing us money. Domestic energy consumption accounts for approximately one third of UK energy demand and, also for the largest peaks in demand. Of that, space and water heating account for approximately 80% of total domestic energy consumption.

One study has shown that we need to reduce domestic demand by 57% if we are to transition to a decarbonised energy system and reduce global warming to an 'acceptable' 2C. By reducing the energy we waste in our homes we can make a positive contribution to reducing global warming, whilst also saving money on bills, and improving our comfort and wellbeing.

The aim of The CHEESE Project is to reduce domestic heat losses. We do this by performing detailed surveys of homes using low-cost thermal imaging equipment to identify areas where simple but effective remedial action can be taken. It is estimated that 30% of heating losses are due to drafts, which can be fixed cheaply and easily when they have been identified. We record energy consumption before and after a survey, to verify the impact of our work.

Our achievements and plans

We look forward to using our new grant funding to develop our existing community partnerships, working with the Centre For Sustainable Energy, Bristol City Council Impact Fund, Bath and West Community Energy, local NGOs, etc to increase the number of homes surveyed, while also delivering free surveys to those on low incomes. We have had to increase our prices, but have held this increase to the 30% flagged up pre-Covid.

We went into this season without grant funding which meant we were only able to offer free surveys by working with our partners CHAS and The WHAM Project (part of CSE) and Re:work who work day to day with those in fuel poverty and vulnerable housing. We also increased our prices and had volunteer survey assistants, rather than being able to pay our assistants as we had the year before.

As the season progressed we started up a partnership with Futureproof, another project of CSE, providing surveys to their clients as part of larger retrofit packages. This has worked well and will continue next season.

We were then excited to secure funding from Bath and West Community Energy to set up a pilot project in Bath and start advertising our surveys and recruiting Our focus for the coming season is twofold: to provide surveys to householders in Bristol and to establish partnerships with other organisations to catalyse the delivery of surveys at scale. Both involve providing detailed training in our thermal surveying protocol to those wanting to deliver surveys from within their own organisation (Councils, Housing Associations etc) or directly for The C.H.E.E.S.E. Project. We will provide beginner and refresher training.

The aim of partnership development is to embed this vital service within the offering of housing providers, and to ensure the ongoing financial sustainability of The C.H.E.E.S.E. Project as a low-cost service, accessible to all. We are committed to a low-cost or free-service model in order to meet our social and environmental objectives, amplified by the increasing urgency of climate destabilisation.

The positive impact of C.H.E.E.S.E. surveys both on householder behaviour and empowerment, and energy saving, is unmatched by other commercial thermal-imaging services. Customer satisfaction is overwhelmingly positive, which we believe is due to the knowledge and sensitivity of the Energy Tracers to the needs of different households and the fact that the social and environmental objectives are the drivers of our work, and this comes across to our customers.

Finally, the project also gained vaulable recognition from the Big Innovation pitch Award for Buildings at the prestigious Futurebuild industry event, the award for Environmental Impact at the ‘Voscurs’ Bristol’s social impact awards, and a feature on BBC Radio 4’s Costing the Earth exposing of the poor quality of new build homes.

The spread of phase-five survey locations: 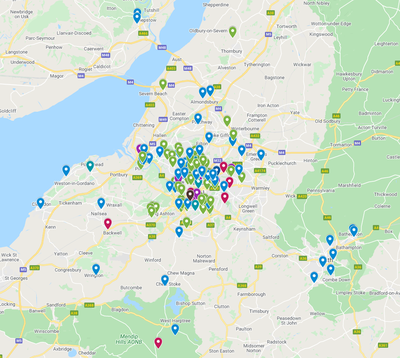 The spread of phase-four survey locations: 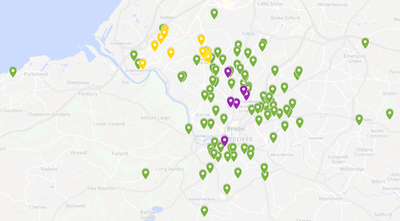 The spread of phase-three survey locations: 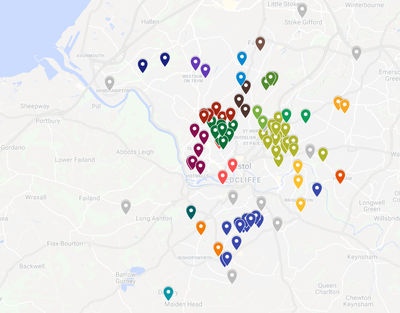 Based on the success of our pilot, we developed the CHEESE Project so that it was able to operate autonomously in the 2016/17 winter surveying season. This required development of many facets of the project:

Following this groundwork, we delivered 56 surveys in and around our target wards, in wide-ranging types of buildings and socioeconomic groups of householders. During this work, we carefully documented many of common faults and remedies and we plan to make this information available to the 200,000 households in Bristol.

The spread of phase-two survey locations: 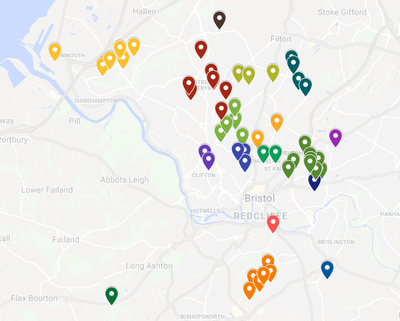 In the 2015/16 winter we completed a successful pilot of the CHEESE Project in Bristol and conducted 30 internal home surveys in the wards of Bishopston, Cotham, Redland, Easton and Lawrence Weston. This brings us to a total of 50 surveys since March 2015.

The pilot surveys were led by Brian Harper, a thermal imaging expert and founder of the Transition Malvern Hills Energy Tracers, the project on which the Bristol CHEESE Project is modeled. This gave us the opportunity to road test our new software, which had been in development for over a year, to use Flir One thermal-imaging cameras for our surveys.

As well as the internal surveys, we also captured a total of 11,000 external thermal images of domestic properties in the same wards for our Google Street View-style Heatview map, covering Bishopston, Cotham, Redland, Easton and Lawrence Weston.

For the achievements of the pilot, the CHEESE project won the Volunteers for Energy Award at the Bristol Green Capital Partnership Green Volunteers' Awards 2016.