New-build homes: why some owners are left feeling the cold

A recently published Guardian article highlights serious problems with the thermal efficiency of new-build homes in the UK. It suggests two issues are at the heart of the matter: dot-and-dab dry lining and poor standards of inspection.

Dot-and-dab is a technique of attaching plasterboard to masonry walls when it is not possible to use screws or nails. Adhesive is applied directly to the wall in 'dots' and 'dabs' and the board stuck to it. The approach provides quick and easy way to dry line a wall. Compared to wet wall plastering, it also provides extra sound and heat insulation, if installed correctly.

We have encountered dot-and-dab in our surveys in Bristol and seen it as a cause of thermal faults by channelling cold airflow within a building. Cold air can infiltrate through insulation from the roof or at joist level and cascades down the back of the plasterboard to exit either at the skirting (by which time it will have warmed up) or to the outside. Bungalows particularly suffer since all their walls connect with the roof space.

As well as being an issue in new builds, we have seen it as a problem in older buildings where it is used as part of energy-efficiency retrofit. In the worst cases, the effect can be likened to living in a plasterboard tent inside your home. The scale of the problem is concerning: approximately 3 million houses have been built since the 1980s when dot and dab became an industry-standard practice.

The example images below show cold air from a floor cavity circulating behind plasterboard in a wall, between the adhesive dots and dabs. 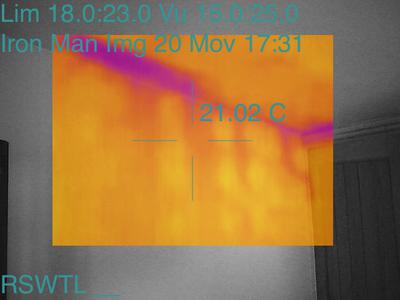 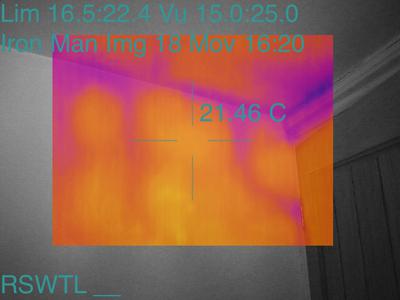 The problems associated with dot-and-dab dry lining are avoided easily by ensuring adhesive is applied all around the edge of each sheet of plasterboard to provide an airtight seal to the wall. This takes much longer, so it is frequently omitted by house builders. Unfortunately, remedying existing dot and dab is not straightforward and in most cases will require the dry lining to be replaced. You can find out if your home has dot-and-dab plasterboard by:

The second issue of poor inspection standards highlighted is a principal motivation for why we carry out our thermal-imaging surveys. Air tightness tests provide a measurement of the draughts within a building but say nothing about the effects of poor insulation and cold bridging. This issue particularly affects new-build houses, where apart from the use of sealants to temporarily block draughts as mentioned in the article, similar short-term effects are caused by paints, which crack over time with movement of a structure. Additionally, inspection is typically only done on a pre-arranged sample of houses which can be specially prepared. Unfortunately, with lax regulations house builders are able to cut corners, leaving new homeowners in the lurch.

Thermal imaging is a powerful tool to characterise the thermal characteristics of a building and to spot specific thermal faults. Although it is unlikely that building regulations will change any time soon, surveys like ours can be used to empower householders to stand up to house builders and tradesmen when they cut corners.

For more information on the defects in dot and dab, see this Designing Buildings wiki article.